For the first time ever, a definitive online multi-media resource has been created from the combined collections of all major Hungarian museums, libraries and archives (including the National Szechenyi Library, the National Museum, the National Gallery and National Archives together with artifacts in Austria, Croatia, Slovakia and Romania) to tell the story of Hungary’s history for universities, colleges, schools, libraries, cultural organizations and individual. Each program of this multi-part media series illustrates a comprehensive yet concise narrative and the development of the country’s art, religion, architecture, literature, political institutions and economy.

Special attention has been given to the complex mosaic of the historic kingdom’s multi-ethnic heritage. A rich tapestry of magnificently filmed monuments depicts successive periods of Hungarian civilization, systematically acquainting the viewer with the best masterpieces of each century. Hungarian music through the ages is lavishly represented from early medieval hymns to the modern compositions of Kodaly, Bartok and contemporary composers.

Over a hundred specially designed animated maps place historic Hungary’s shifting fortunes in a clear geographical context. To ensure the highest standards of scholarship, internationally recognized authorities on each period have participated as script consultants under the supervision of the Institute of History of the Hungarian Academy of Sciences.

What People Are Saying about Hungary: A Video Series

“It is a pleasure for me to express my admiration for your video history of Hungary. You managed to combine meticulous scholarship with being interesting and highly informative ... You have covered all major aspects of history, with a strong emphasis on culture. The value of your series goes beyond Hungary and the Hungarians.” (Dr. Geza Jeszenszky, Ambassador, Republic of Hungary) 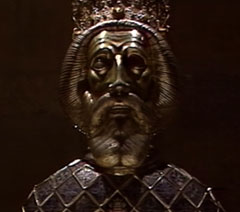 On-location shooting and studio production for the multi-media series have been organized by the Cultural Department of Hungarian Television to ensure broadcast quality.

For a preview of the video series click here.